The relationship between Agave and Tequila

I’ve learned so much about Agave since frequenting Cocina de La Sirena – so much so that perhaps regular visitors assume they should be awarded some kind of degree for their newfound knowledge.  We live in a college town with Texas Tech University down the road, and the education doesn’t stop within the Texas Tech System or our other institutions nearby like Lubbock Christian University and Wayland Baptist.  No, you can come to La Sirena at happy hour, 4-6pm Monday through Saturday, and for a few dollars, shoot yourself silly, packing Tequila knowledge into your Agave-muddled mind as often as you like.  Once you do, you can review your experience on Google here.

La Sirena, despite being one of Lubbock’s hottest up-and-coming chef-driven restaurants, (according to the Texas Monthly), is happy to be known simply as a Tequila Bar.  However Cat and Jessica will quickly point out that you are standing in the “Mermaid Lounge and Patio” when you arrive.  Agave beverages are consistent in that they come from roughly the same plant, but the spectrum spreads wildly, similar to the diverse shops you’ll find in Cactus Alley, and even the diversity of the decor within La Sirena itself.  To start with a proper overview, it’s useful to have a diagram, and even more useful when you can borrow a diagram from the Mezcal PhD. 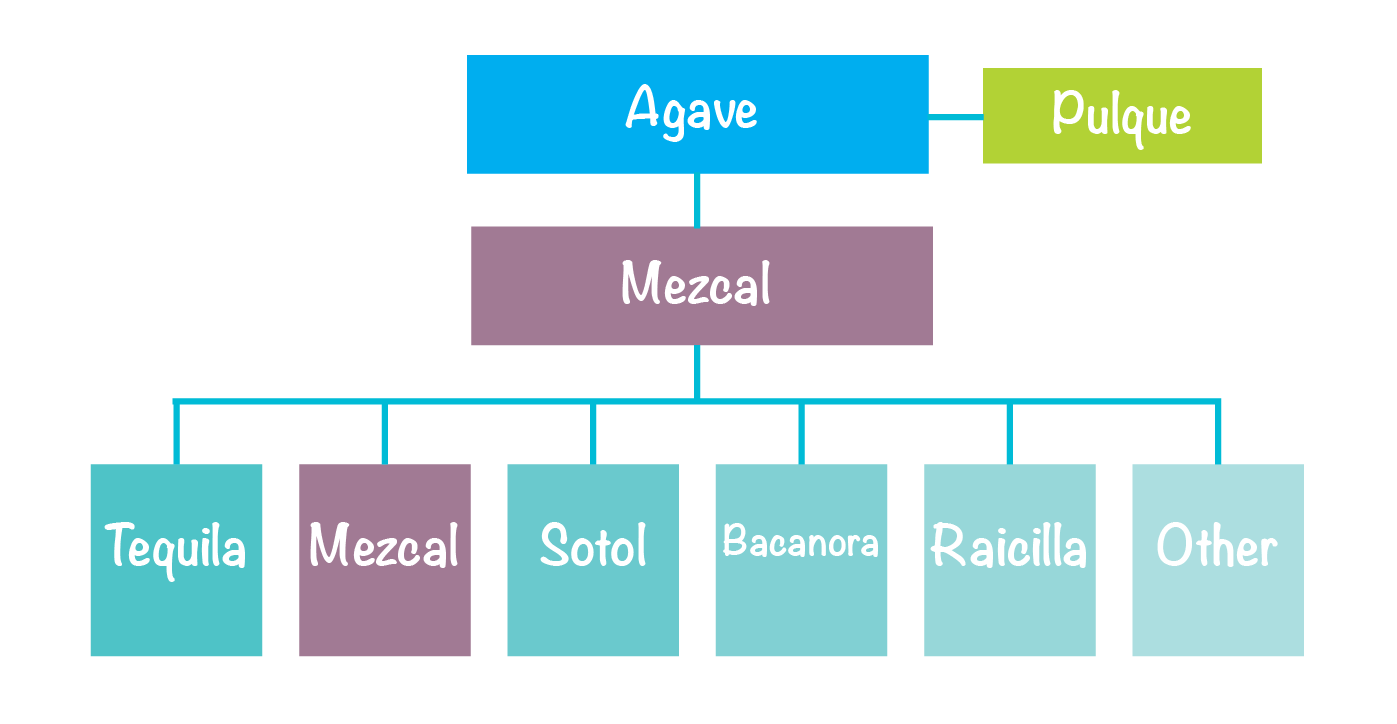 This graphic is explained by the Dr. of Mezcal himself, John McEvoy in the article below:

If we were to entertain our higher educational metaphor further, and you needed to buy books for your tequila degree, this would be on your reading list:  Holy Smoke! It’s Mezcal: A Complete Guide from Agave to Zapotec, complete with a break-up letter in the forward.

http://mezcalphd.com/holy-smoke-its-mezcal-a-complete-guide-from-agave-to-zapotec/ That being said, let’s get to studying.

Agave is the plant from which distilled Mezcals are made, as well as the one non-distilled alcoholic beverage, Pulque.  With an ABV of 3-5%, Pulque is similar to beer but more like alcoholic milk.  Unfortunately for North Americans the canned form of this milky white substance is said to suck.  Moving down the list in our handy diagram, any distilled Agave beverage is a Mezcal.  So Tequila is a Mezcal, and yes, you guessed it Mezcal is a Mezcal.  Lesson over!

We could keep going to point out that Sotol is a Mezcal, but WAIT!  It’s actually not originally made from the Agave plant, so what’s it doing in there?  It’s made from the Desert Spoon, which looks an awful lot like Agave, and the natives still don’t really care about the difference.  Some white lab coats in another country decided to change the taxonomy.  Until I drink Sotol at the same table shared by those natives and the taxonomists, we’ll leave it here in the Agave family.

Bacanora, my PhD friend tells me, comes from the wild agave Pacifica which is only found in the state of Sonora, the only state from which Bacanora can be shipped.  Similar to Scotch only coming from Scotland, where it’s known as a whisky, otherwise it’s a whiskey with an “e” coming from Ireland, America, Japan, etc.  Last but not least Raicilla is produced in Jalisco and associated with the Puerta Vallarta area made from more regional agave plants in the area.

Don’t let the detail intimidate you.  The most important thing is to start drinking.  Any bartender or server at La Sirena will guide you comfortably through the process, possibly starting with a tequila flight to compare the Blancos, Reposados, Añejos and Extra Añejos, (which means White, or pure, aged no more than 2 months, Rested, aged 2-11 months, Aged, aged 1-3 years, and even Extra Aged, aged more than 3 years.

But even that may be unnecessarily complicated.  If all you want is a shot of tequila, try the chef’s special, commonly called a Poquito.  This little shot of beautifully bottled blanco from our house well is served with a cinnamon rim and blood orange chaser.  The warmth this brings, with the cinnamon and blood orange, complements the heat of the tequila like a little hug, or abrazito if you will.  Gone are the days of salt and lime, like changing from diapers to drawers, or baby diapers to adult diapers, or some such failed metaphor.

If shooting things is not your thing, (OK pacifist), and you’re like me, you will enjoy diluting the blood in your tequila stream, one margarita at a time.  My margarita of choice is a De La Casa with fresh lime and a cinnamon rim.  Ask the bartender or server about the tequila and orange liqueur being used and you’ll add a further chapter to your tequila handbook .  Of course, if Mermaid Water is your thing, you’ll have the orange liqueur walk the plank, leaving your drink ship-shape with pure tequila and lime.

Depending on the season, you may order an antioxidant-rich hibiscus margarita to combat the flu, a blood orange margarita to boost your immunity to spring fever, or a watermelon jalapeño margarita in the summertime when the weather’s fine, and you’ve got mermaids, you’ve got mermaids on your mind.  Seasonal produce can be found on the menu in La Sirena comida, and the same goes for their bebidas.

If you want to dispel any rumors about tequila being a stimulant instead of a depressant, you could follow this chat where characters from the Matrix battle it out for science, http://www.blueagaveforum.com/forum/index.php?/topic/2505-is-tequilla-a-stimulant/, or you could experiment with your own body.  If your body is a temple, why not offer it some tequila?  If your temple doesn’t allow tequila, try a bit of mezcal with non-alcoholic ginger beer for a Mezcal Mule, a take on the Moscow Mule, served with a savory smoked salt rim to die for.  Whatever you decide, make that move with pride.  Agave will be there and so will I, drinking mezcal ’til I die…